The goal of this article is to run a C program bare metal on an ARM Cortex M3. We will go through the assembler code generated from a small program written in C and come up with the prerequisites that must be in place in order for it to run.

The following files are used in this article:

I use the following makefile to compile and link:

The cross compiler versions of these tools can be obtained as Ubuntu 18.04 packages.

ARM also maintains a GNU Embedded Toolchain for Arm which is available for download at https://developer.arm.com/open-source/gnu-toolchain/gnu-rm/downloads.

I use the Ubuntu package variants in this article with the following versions:

Below is our C program. It defines variables a, b and stores their sum in a variable named sum.

We compile the program using the -S command line option:

The -S option will give us the corresponding assembler code, see section 3.2 in the gcc documenation:

The full assembler code listing of test_program.s is shown below. We will divide it into parts and analyze.

The first part defines ARM assembly attributes which do not correspond to any specific line of code.

Immediately following the end of main() are the .L3 and .L2 labels.

The memory map of STM32F103RBT6 is shown in section 2.2 of the STM32F10xxx Programming Manual: 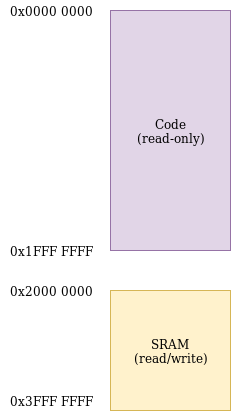 The reset vector of STM32F103RBT6 is defined in section 2.3.4 in the STM32F10xxx Programming Manual, it defines the start addresses of exception handlers.

One such exception is system reset whose handler start address is read from 0x0000 0004. This means that the Cortex M3 will execute the code starting at the memory location read from address 0x0000 0004.

The first 7 entries in the reset vector are shown below. The least-significant bits of vector start-addresses must be 1, this indicates that the exception handlers are implemented with Thumb code.

The program is stored as a raw binary file and flashed onto the flash memory of the STM32F103RBT6 starting at address 0x0000 0000. The SRAM memory region, i.e. 0x2000 0000 to 0x2000 4FFC will contain random data when the CPU starts to execute. Any mutable data that the C code assumes is available in a read/write region must be put there by the startup code.

The first entry in the vector table shown above sets the initial value of the stack pointer. The stack pointer is used by the push and pop instructions at the start and exit of the main() function as shown above.

The stack of the ARM Cortex M3 (STM32F103RBT6) is full descending according to section 2.1.2 in the STM32F10xxx Programming Manual: “This means the stack pointer indicates the last stacked item on the stack memory. When the processor pushes a new item onto the stack, it decrements the stack pointer and then writes the item to the new memory location.”.

We can set the initial stack pointer address to 0x2000 5000 (see ARM Cortex M3 memory map). The stack pointer will then be decremented to 0x2000 4FFC on the first push encountered in the code and store the data there.

We can compile a number of prerequisities that must be in place in order to execute the assembler code generated from test_program.c.

We want the STM32F103RBT6 memory to look like the image shown below when the assembler code generated from test_program.c starts to execute. 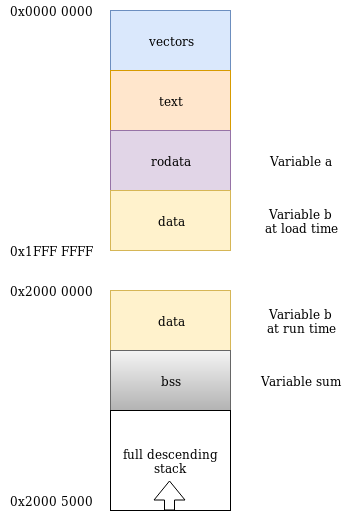 We must use the linker script and also write some C startup code in order to get this.

The linker script will tell the linker on what memory locations to put different sections of the code. See chapter 3 about Linker Scripts in the GNU Linker documentation.

We can print the sections available in test_program.o using objdump.

We have all sections available that we want in our final executable besides vectors. The various .debug* sections will be available in the final .elf file for usage by the GDB debugger, but they will not be included in the “raw” binary copied onto the target.

We can write some C code to define a vector table.

The .rodata section containing the variable a will also be put in the read-only memory region directly after the .text section.

Next up is the .data section. This section is special compared to the other sections since we want it to be present both in the read-only and read-write parts of the memory.

It should be available in its load time position in the flash memory at system reset. We can put it right after the .rodata section. We create a symbol named _DATA_ROM_START which points to this memory location.

However the linker script syntax does not allow us inserting the .data section into its position on flash right away. Instead we move the location counter to the start of the SRAM (read/write) memory region. The memory address at the start of this region is stored in symbol _DATA_RAM_START. 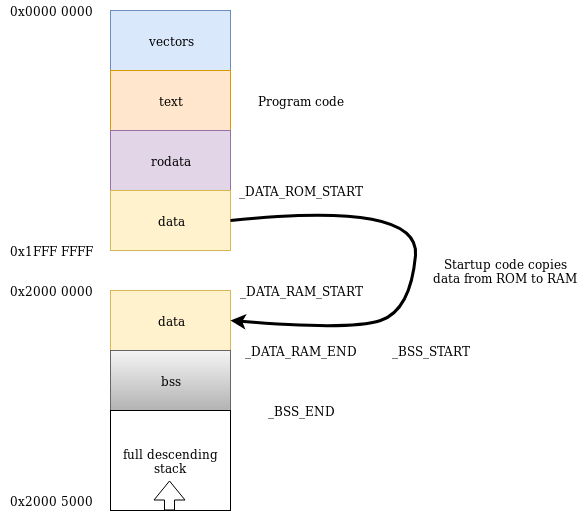 The .bss section is put right after the .data section. We put start and end addresses in the following symbols:

The full linker script is shown below.

The startup code begins by declaring a number of symbols defined in the linker script.

After that we define a vector table as already shown above. We also have to forward declare the startup function defined below since we need to reference it in the vector table.

We now write a function named startup() with the following responsiblities:

We need to make a forward declaration of the main function since we reference it at the end of the startup function.

The full C startup code is shown below.

We need to perform a couple of steps to build test_program.c together with startup.c using our own linker script.

Link the object files according to the rules in our linker script named stm32.ld using GNU linker ld.

Use objcopy to convert the .elf file from the linker into a “raw” binary. The “raw” binary is what we will run on the target while we will feed the elf file into the GDB debugger since it contains debugging information.

We can inspect the sections in .test_program.elf with objdump as we did with test_program.o above.

Every loadable or allocatable output section has two addresses. The first is the VMA, or virtual memory address. This is the address the section will have when the output file is run. The second is the LMA, or load memory address. This is the address at which the section will be loaded. In most cases the two addresses will be the same. An example of when they might be different is when a data section is loaded into ROM, and then copied into RAM when the program starts up (this technique is often used to initialize global variables in a ROM based system). In this case the ROM address would be the LMA, and the RAM address would be the VMA.

The .data section has different VMA and LMA as expected. VMA is 0x20000000, i.e. at the beginning of the SRAM. LMA is 0x9c which is right after the .rodata section in ROM.

The sections also have flags associated with them, e.g. CODE, READONLY and DATA. Some of the flags are self explaining, e.g. the .text section contains executable CODE, whereas other are harder to understand.

Figure 4-11 of Chapter 4 in System V Application Binary Interface explains a subset of these flags although using different names.

There is also a relevant conversation on stack overflow:

CODE means that the section contains executable code; it is indicated by the SHF_EXECINSTR flag in the section header

DATA means that the section is not executable but is writable, indicated by the presence of the SHF_WRITE flag

ALLOC means that the section occupies memory, e.g. memory pages are actually allocated to hold the section content when a process is created, indicated by the SHF_ALLOC flag. Some sections, e.g. those containing debug information, are not read into memory during normal program execution and are not marked as ALLOC to save memory.

We can inspect the symbols with corresponding memory addresses in test_program.elf using arm-none-eabi-nm:

We will use the memory addresses of a, b and sum to verify that our program has run correctly.

We flash test_program.bin onto the ARM Cortex M3 using OpenOcd.

Connect to the openocd server using telnet in another command window

Halt execution of target in case it is running

Run gdb using our test program and connect to the openocd server on port 3333. We use the GDB TUI (Text User Interface) as described in Use GDB on an ARM assembly program. 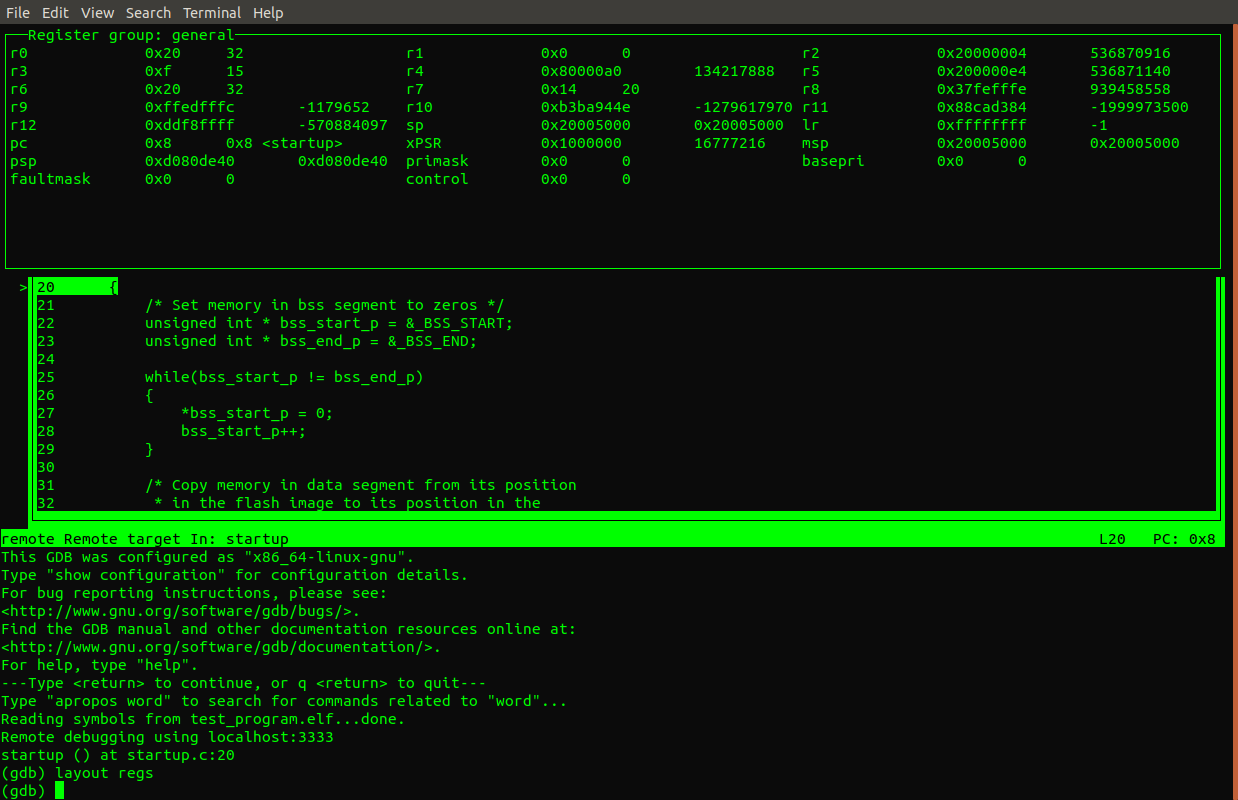 Set a break point at the beginning of the main() function in test_program.c. 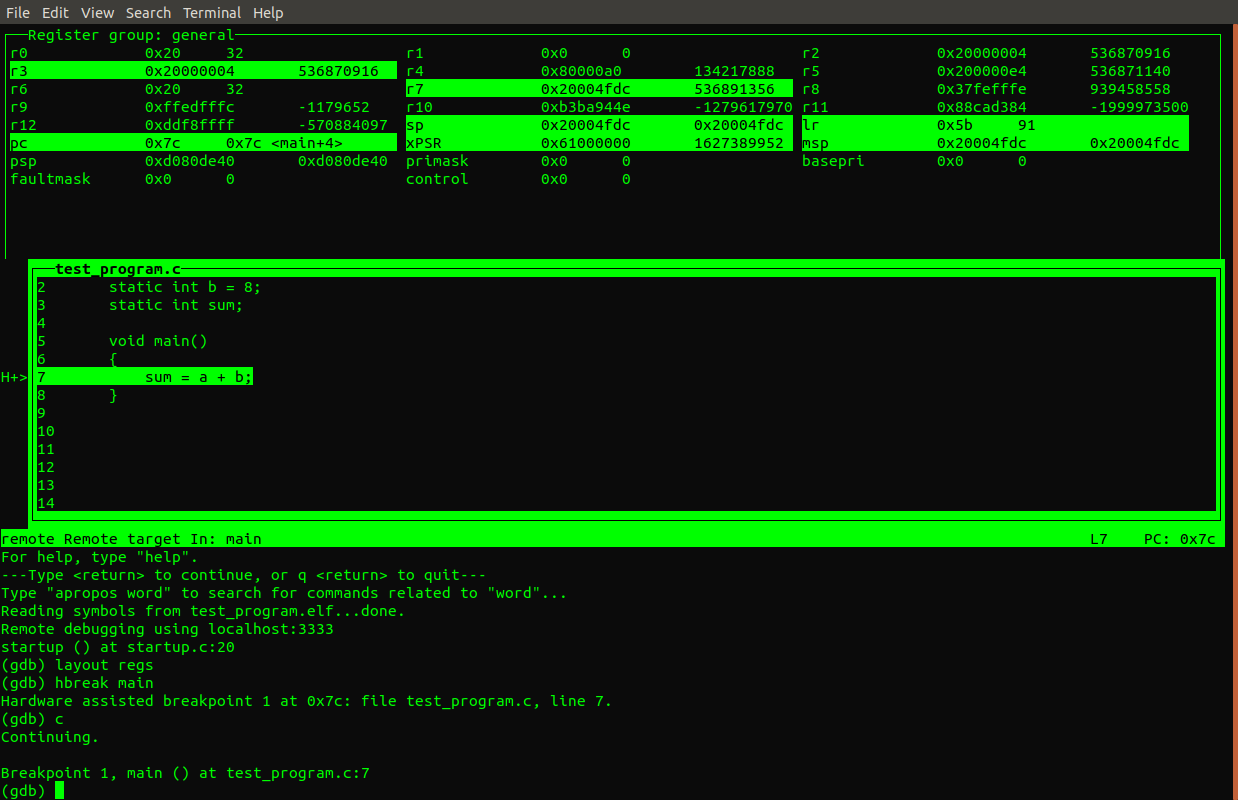 Inspect the values of a, b and sum before executing sum = a + b. 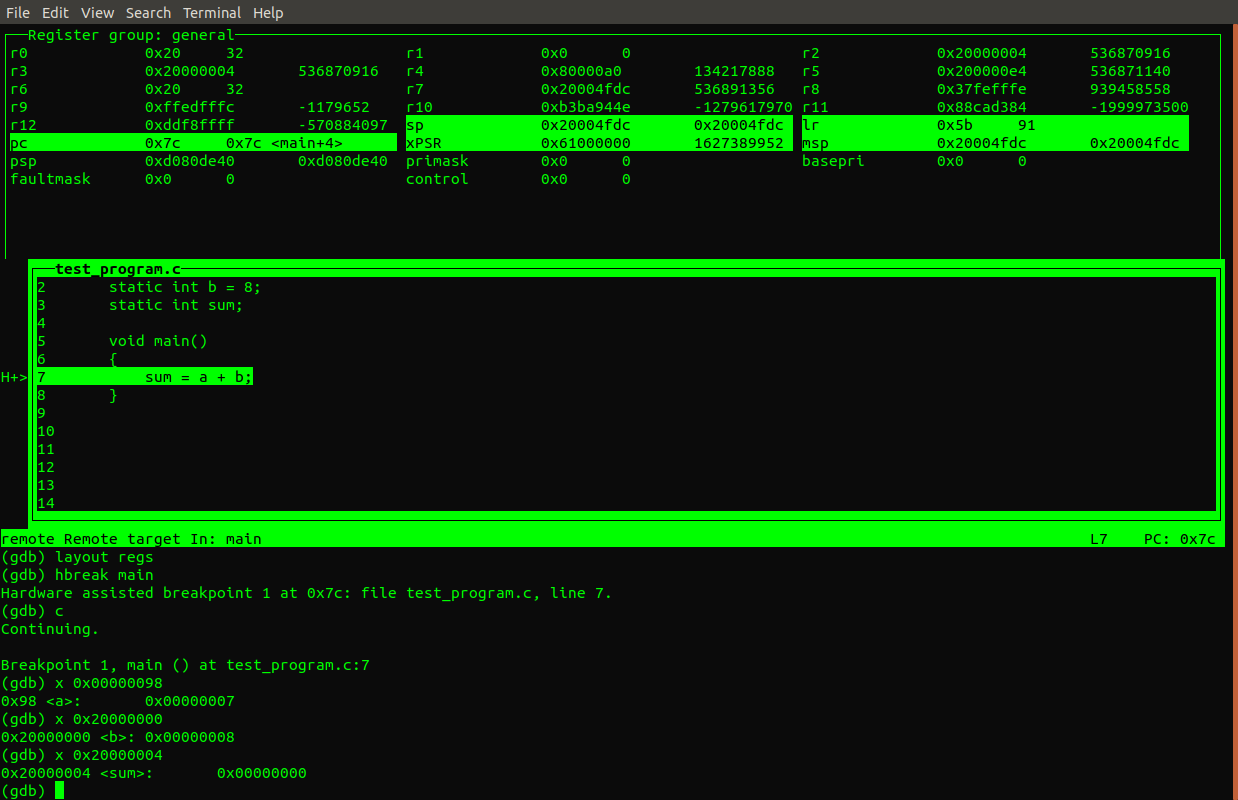 The sum variable now equals 0x0F (15) which is correct. 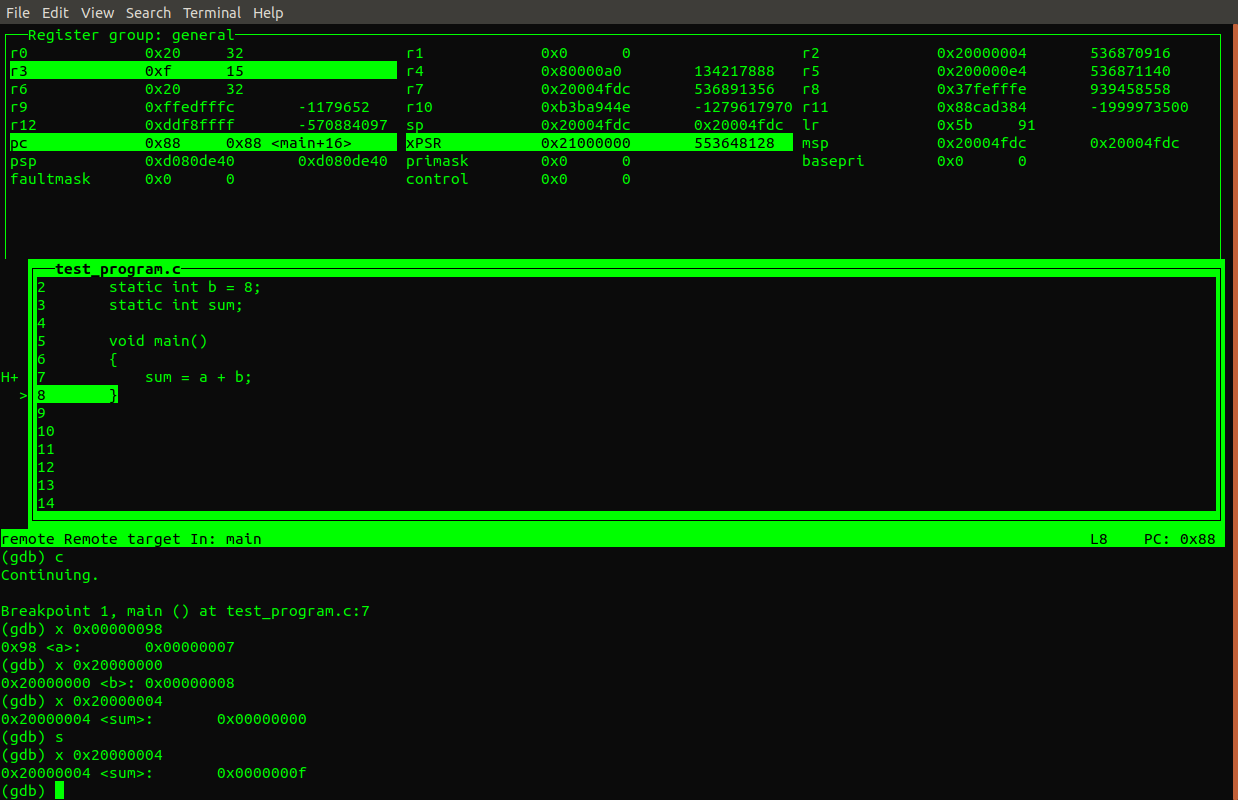