Meeting C++ is a yearly conference taking place in Berlin. This year, i.e. 2018, it took place on 15th to 17th of November. It is organized by Jens Weller. As far as I know it is the biggest C++ conference in Europe. 650+ people attended this year. It was the third time I attended the conference. I took the train as usual starting early in the morning from Gothenburg and arriving in Berlin around 19 o’clock after switching trains in Copenhagen and Hamburg.

Daniel Eriksson and Dave Brown from Gothenburg also attended the conference. We are are all active in the Gothenburg C++ Meetup.

The venue of the conference is Vienna House Andels Hotel. I recommend staying in a room in the same hotel to save on travelling time in the morning and afternoon. I think most people attending the conference do this. The hotel feels quite new and the rooms are nice. I especially like that the air condition works properly since I have had bad experiences with too warm rooms in other hotels. 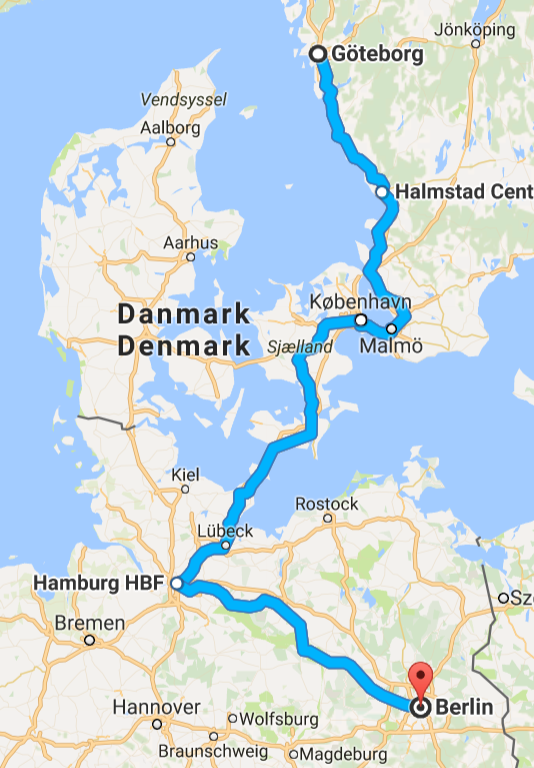 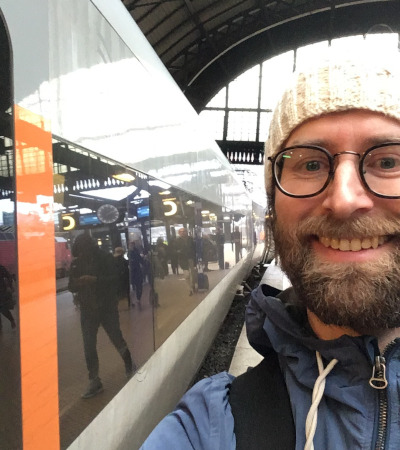 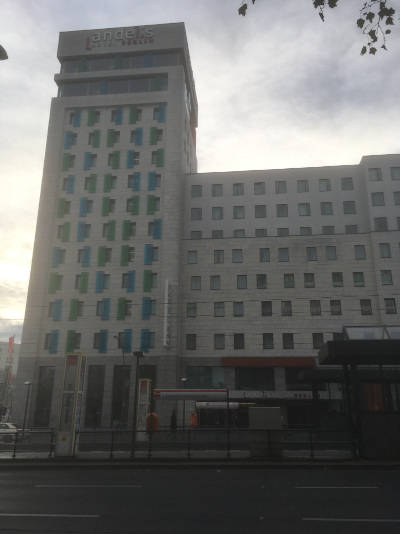 A lot of the talks have a strong template focus as I have already noted previous years. I had improved my template metaprogramming knowledge somewhat prior to this years conference which made it easier to follow the talks. I also attended the workshop day arranged by Nicolai Josuttis prior to the conference itself to boost my template knowledge a little bit more. The theme of the workshop was Modern C++ Template Programming.

I listened to 14 talks all in all not counting lightning talks. I also joined the Conan C++ quiz on the Thursday evening. I think it was a lot of fun even though we had great potential for improvement in my team with regards to the number of points we managed to acquire.

Below are my notes from the talks I attended. 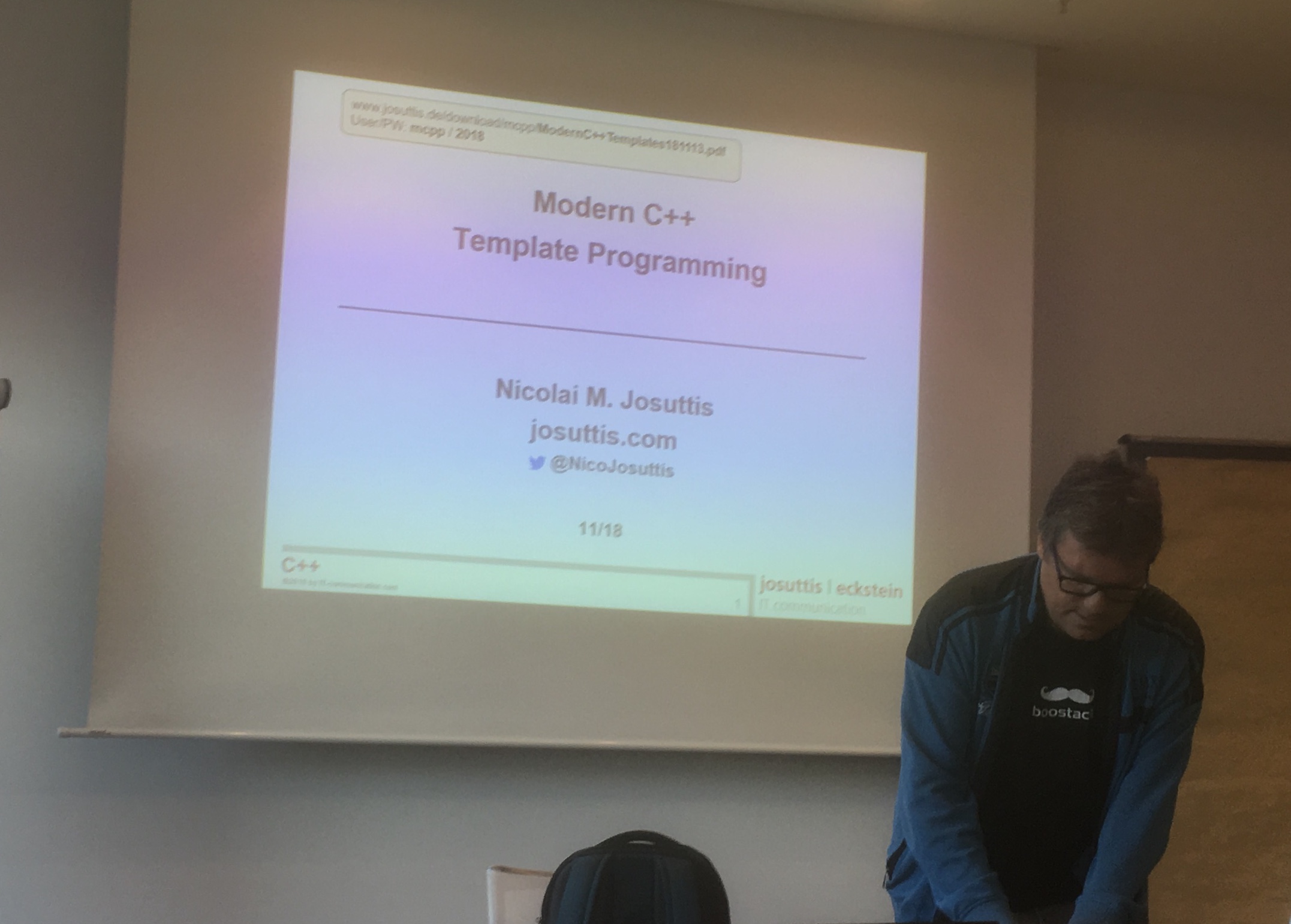 I finished one full day of templates workshop with @NicoJosuttis at @meetingcpp. 😅 A lot of information but I think the area is becoming more clear for me. 👍 I still need to learn more about what solutions make sense in my typical use cases. pic.twitter.com/SSOGyiTuCR 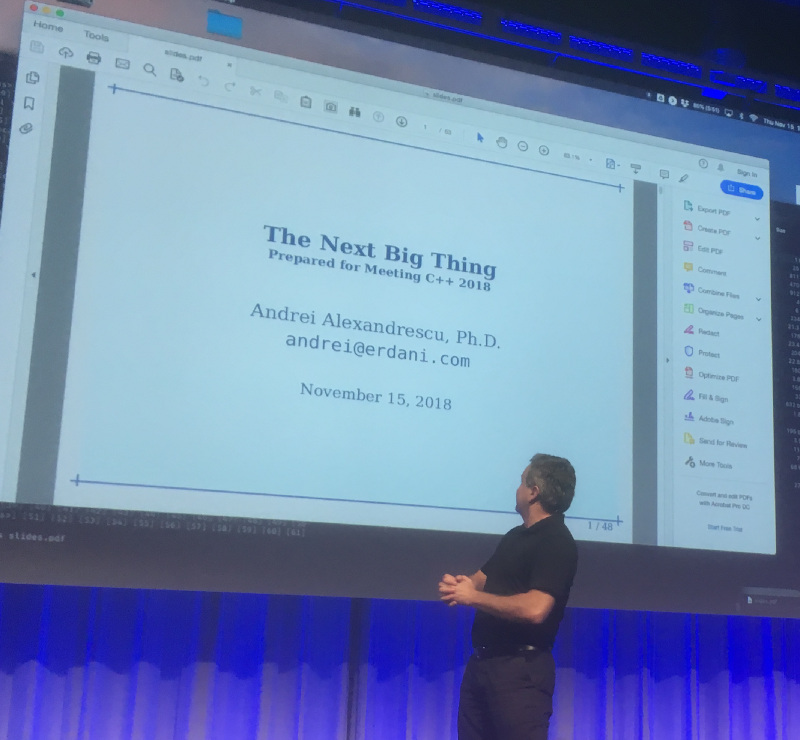 Andrei Alexandrescu talked about Design by introspection. He talked about the C++ statement if constexpr. He thinks that the potential use cases for if constexpr would be more compelling if it would not introduce a scope. He would like to use if constexpr to select between different designs based on compile time conditions. Andrei also mentioned Policy based design.

I recently noted a blog post by Barry Revzin where he writes about the talk by Andrei. 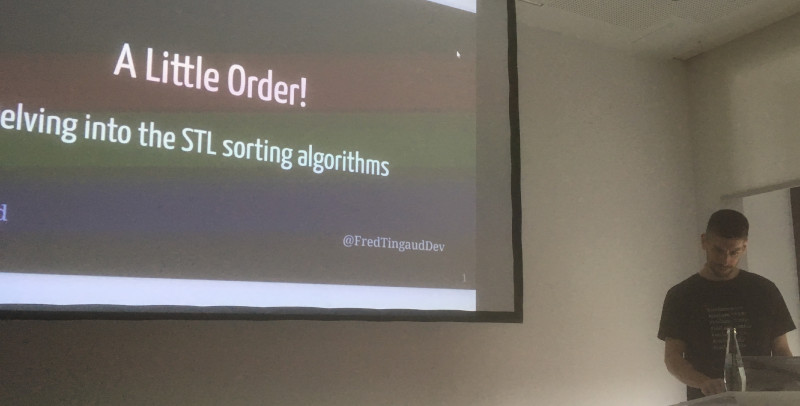 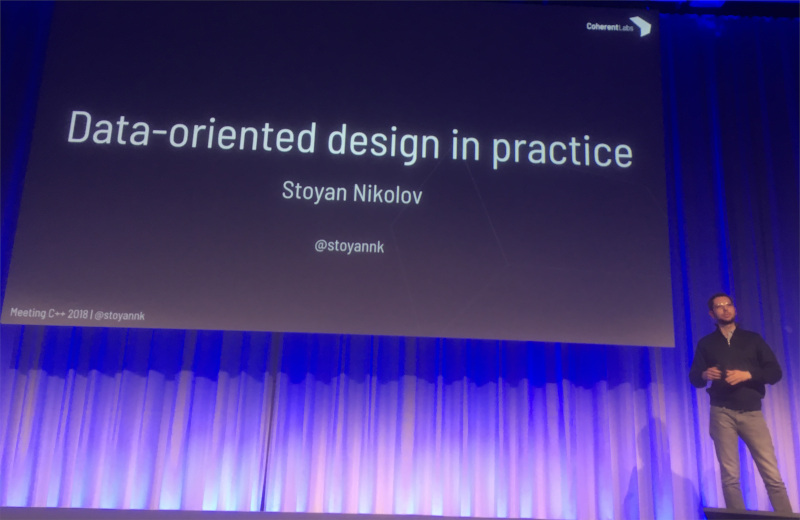 Stoyan Nikolov talked about data-oriented design. He said that the basic issue with Object Oriented Programming is that data is combined with operations which means that heterogeneous data is brought together. In data-oriented design data and operations are kept separate. The data is organized according to its use. Functions are used to work on the data. Data oriented design has mostly been used in games. Main selling point in my understanding is performance. The data is laid out in such a way in memory that the CPU intensive operations goes quicker.

std::variant and the power of pattern matching (Nikolai Wuttke) 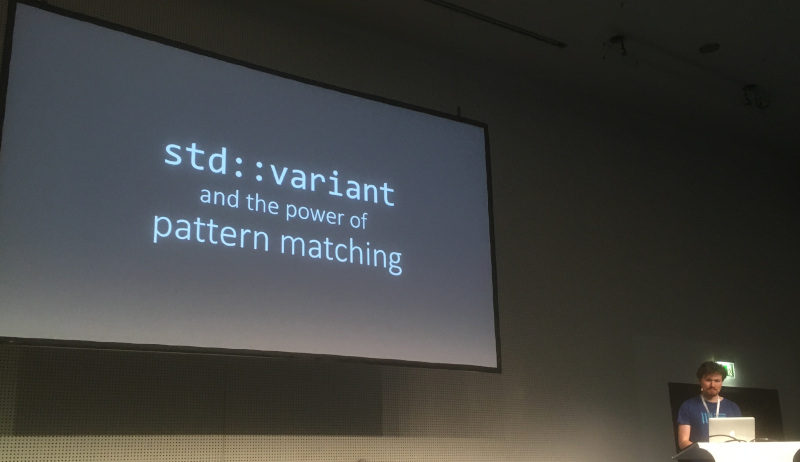 Nikolai Wuttke talked about a programming style based on pattern matching using std::variant introduced in C++17. Nikolai compared different ways to handle states in a small example Space Game application. The traditional approach is to use an enum combined with state variables. Nikolai showed a different approach where possible states are stored in a std::variant and he makes use of std::visit to apply correct operation depending on current state. He went further and combined std::variant, std::visit with the experimental std::overload to write a match function to get something that is close to the native pattern matching available in Haskell and Rust.

He argued that not only performance is important but also whether the allocator acts in a predictable way. Andreas went on to discuss different types of allocators:

Middle Keynote: The Truth of a Procedure (Lisa Lippincott) 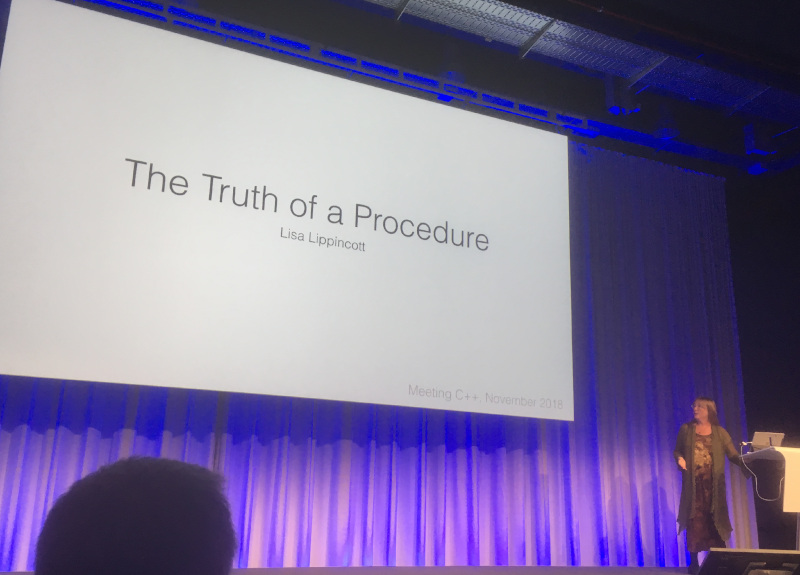 Lisa Lippincott talked about how to apply formal reasoning on how a program works. She also discussed checkable proofs. Lisa presented the concepts using examples that she called “game of truth”, “game of necessity” and “game of proof”. 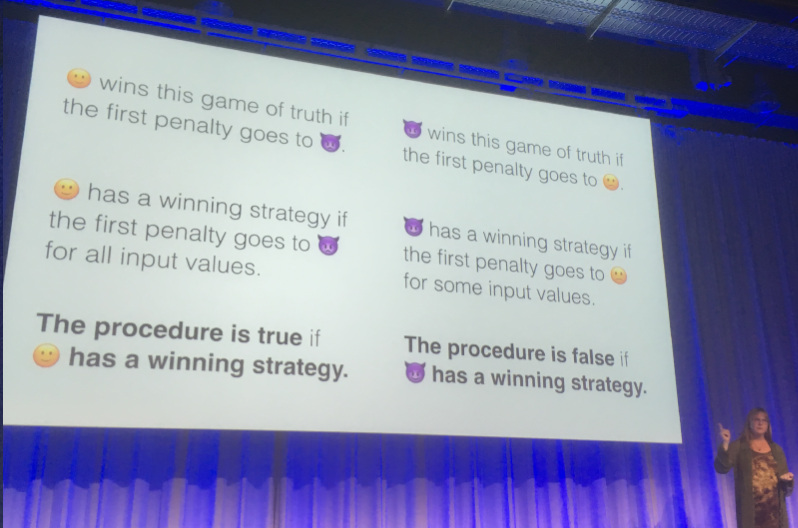 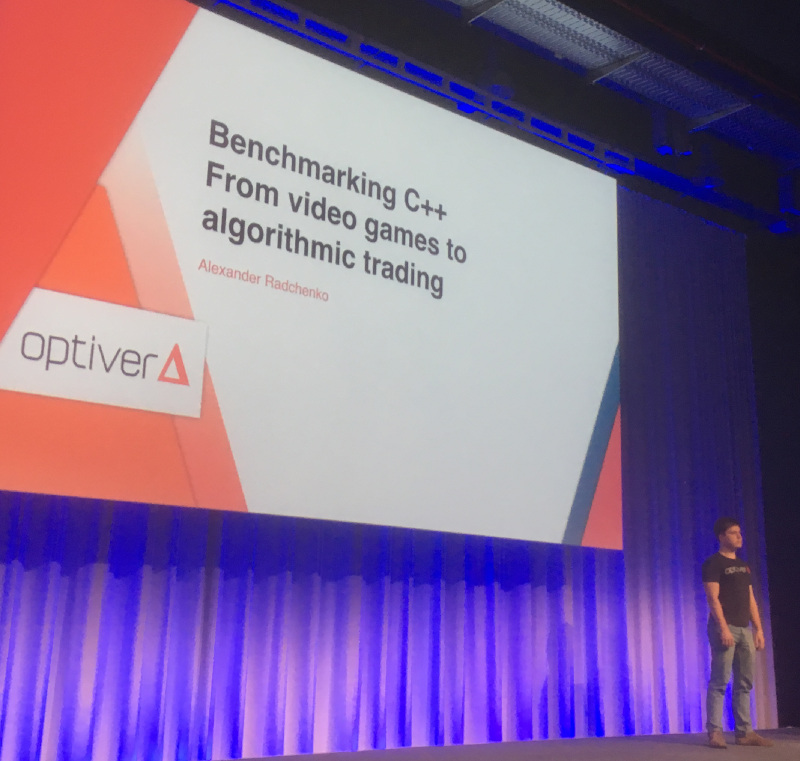 Throughput is most important in games whereas high frequency trading applications focus on low latency.

Alexander makes use of Jupyter notebooks to analyze and visualize performance measurements. 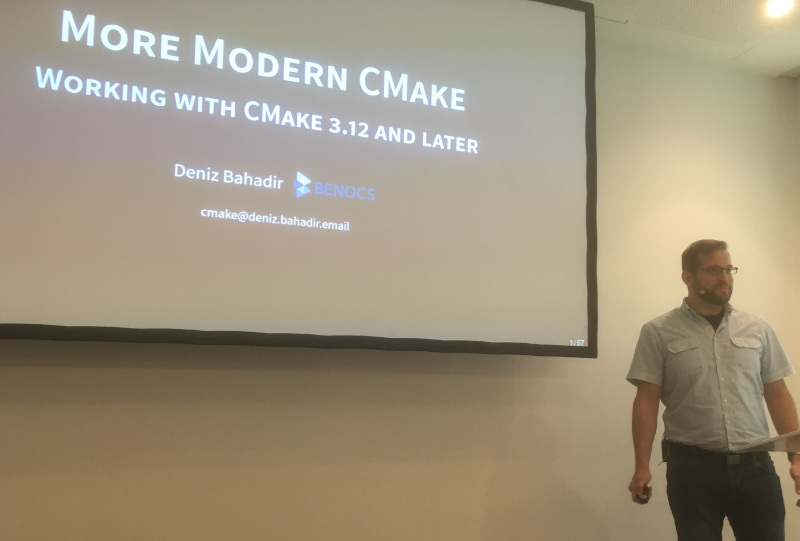 With more modern CMake one should create a target first without sources and later add build- and usage requirements using target_... commands. A target can be an application or a library. Below is an example from Deniz GitHub account where the target_link_libraries command is used to set MyCalc::basicmath and Boost::program_options as build requirements for the FreeCalculator executable target: 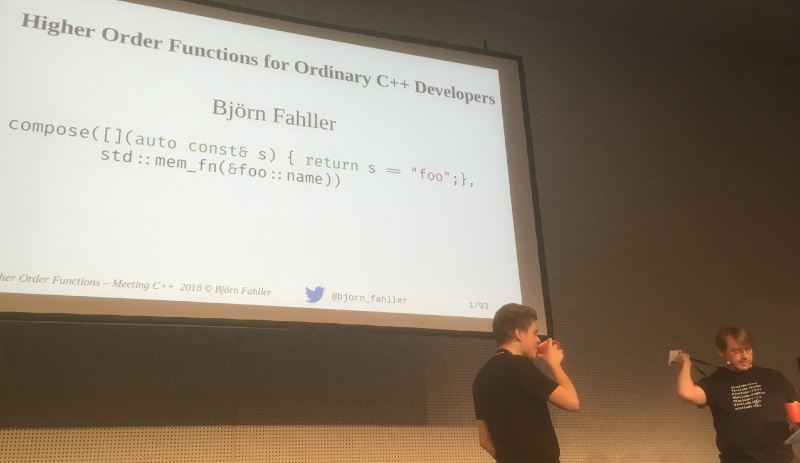 Björn Fahller explained that a higher order function takes other functions as arguments and return functions.

One take away from Björn is to use the auto keyword to create functions that returns lambdas. Example:

std::function can also be used but is not quite as generic.

Björn has written a library named lift that contains a number of higher order functions.

Simon Brand has written a variant of std::optional that allows functional style syntax and removed the need for many conditionals.

C++ Concepts and Ranges - How to use them? (Mateusz Pusz) 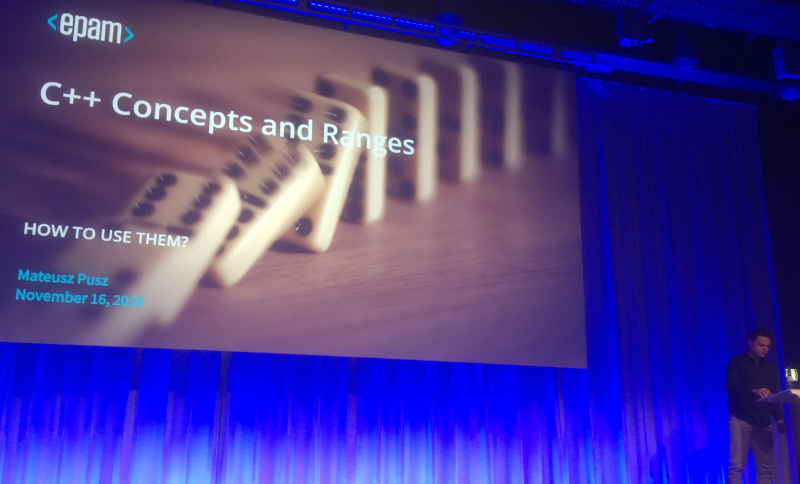 Mateusz Pusz talked about concepts and ranges. Mateusz showed the concept syntax agreed on at Toronto 2017.

Use a concept in a template function

There is also a shorthand notation

He argues that one shall use algorithms from std::ranges instead of from namespace std. 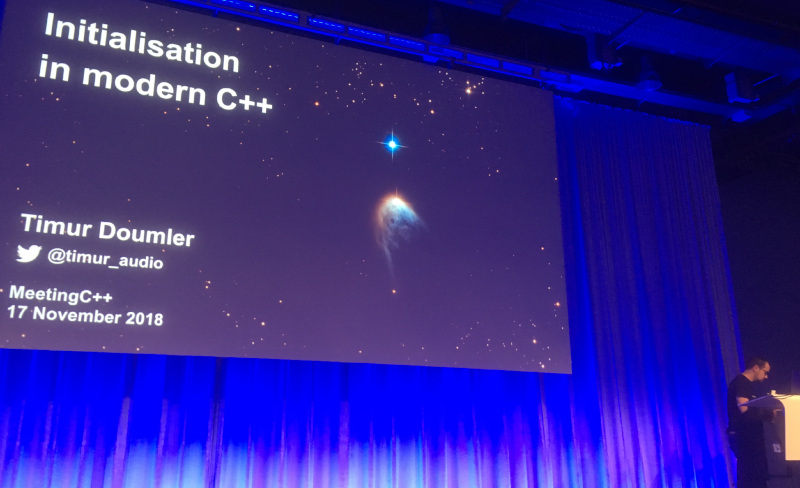 Timur Doumler talked about different ways to do initialisation. He started with initialisation in C. He went on and described what other initialisation alternatives that were added in C++98, C++11, C++14 and C++17.

The initialisation recommendations from Timur for C++17 are:

Timur has created a handy table showing initialisation alternatives in C++17. The table is available in a tweet from Timur. 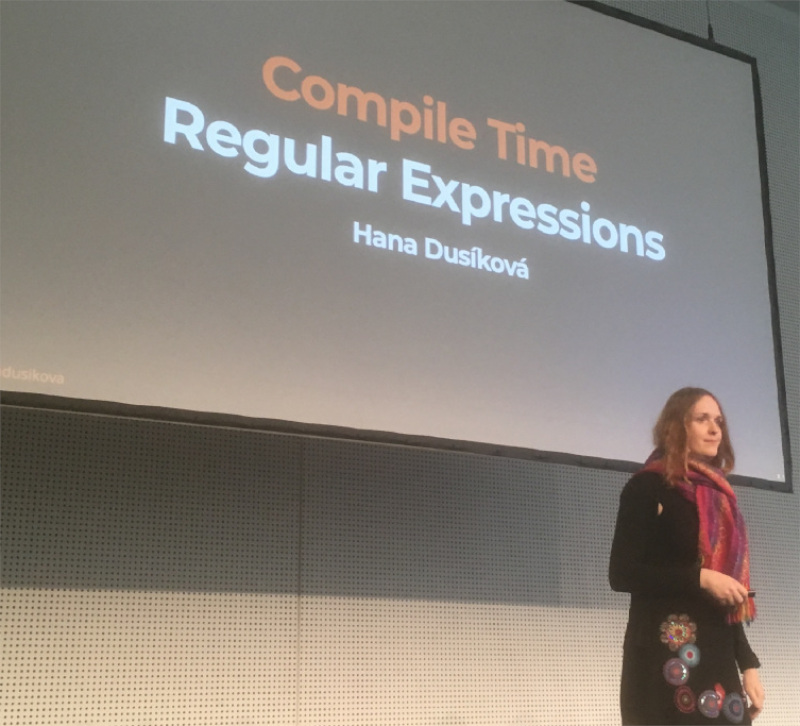 Hana Dusíková talked about a Compile Time Regular Expressions (CTRE) library that she has created. 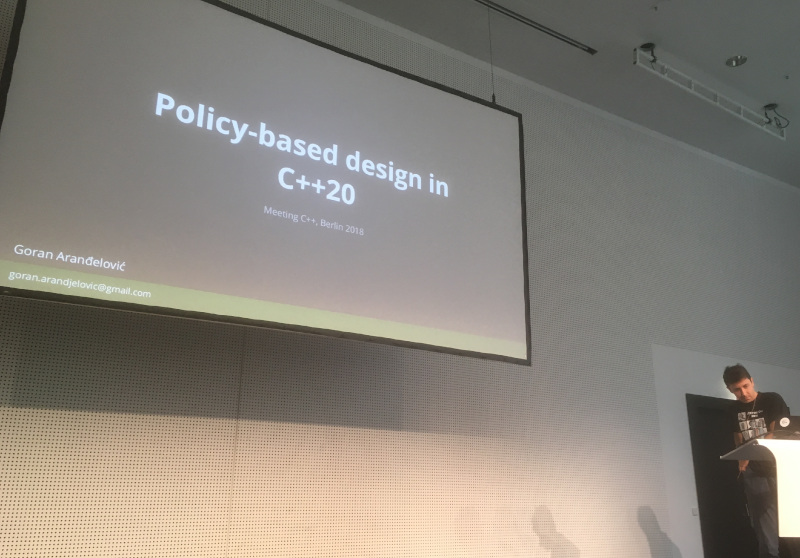 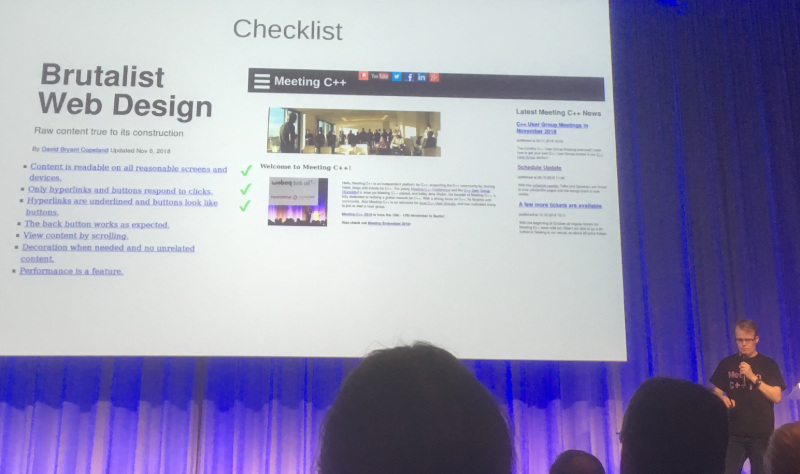 Jens Weller held a lightning talk among others. He talked about the principles behind so called brutalist web design.

Nicolai Josuttis delivered the closing keynote. One of his messages was that there no single C++ style. 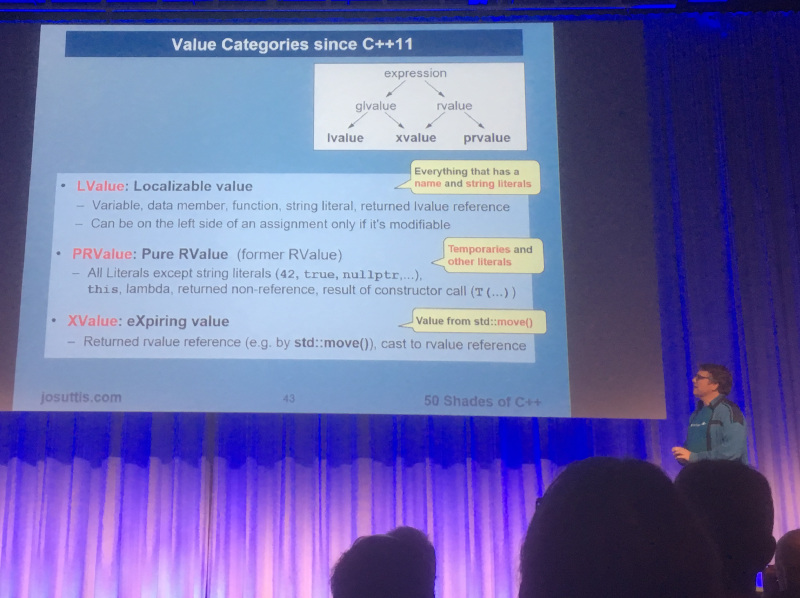 Nicolai also discussed the standardisation process in the C++ committee where he mentioned the Virginia Satir Change Model among other things.

Nicolai also explained how value categories have evolved starting with K&R C and ANSI and going to C++11 and C++17:

Value categories in C++11 can be thought of as:

A glvalue is an expression whose evaluation determines the identity of an object, bit-field, or function.

A prvalue is an expression whose evaluation initializes an object or a bit-field, or computes the value of an operand of an operator, as specified by the context in which it appears.

An xvalue is a glvalue that denotes an object or bit-field whose resources can be reused (usually because it is near the end of its lifetime).